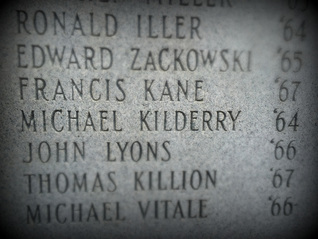 My Tribute to Billy K
Forty-three years ago, I started dating a local girl from the neighborhood. She soon became my soul mate and eventually my wife. Her three siblings came along as part of the package. Over time, the three became more than in-laws, they became two brothers and a sister. There had been a fourth sibling, but he did not make it home from Viet Nam. He is one of our HONORED 27. I did not have the pleasure or the honor of knowing him, but having known his older brother, I feel that I knew him also.

My story centers on this older brother, Bill Kilderry. Being only a year apart from Michael you might consider them to be twins. Everything they did, they did together. It was only when it came to serving their country did they separate. Bill, the oldest, joined the Air Force and Michael joined the Marines. The day Michael died, a piece of Bill died along with him.


Over the years Bill and I became very close, like real brothers. Though we did not share the same bond that Bill had with Michael, we had a special relationship. As a contractor for more than forty years, Bill had a lot of friends and through Bill most of them became my friends. His loyalty and compassion were second to none. He was always there when you needed him and everyone who knew him, liked him. He was a true Judge Guy.

This special relationship came to an end when we buried Bill the first week of January this year. The last month was tough but it was made easier by Bill who was at peace. He had certain things that he wanted to accomplish before he went to face his Maker. One item on his to-do list was to establish a scholarship in his brother Michael's name. So Bill and Michael's alma mater, Father Judge High School, now has the Michael J. Kilderry Scholarship Fund. Scholarships will go to boys in need, who are without a father, from St. Matthew's Parish. Even at the very end Bill chose to honor Michael rather than himself. That is the way he was.

For all of you out there who had Billy work on their houses, I have a simple request. For every window or door that Bill installed, kindly send one dollar to the Michael J. Kilderry Scholarship Fund. Mail the donation to the school Office of Advancement.

This is my tribute to my brother Bill Kilderry, Class of 1964. With all of your help, he will always be remembered and he will be with us forever.