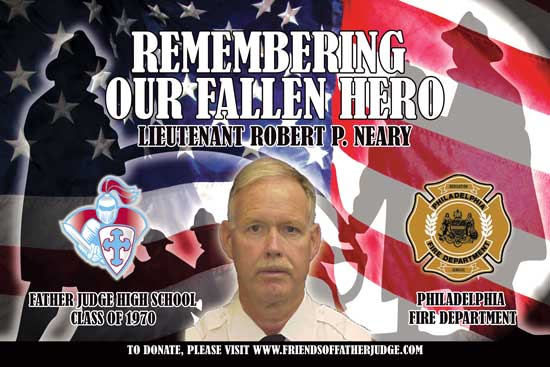 Bob Neary was a member of the Father Judge High School Class of 1970.  While attending Father Judge he was a member of the Student Council, National Honor Society and the varsity basketball team.  Throughout Bob's life he displayed his values that were taught to him at Father Judge namely honor, integrity, service and commitment. Over the course of his 40 years after graduation from Father Judge, Bob served in the US Army Reserves as a Sergeant 1st Class, he was Philadelphia Police Officer from 1971 to 1974 then transferred into the Philadelphia Fire Department  as a firefighter and later achieved the rank of lieutenant. Bob was awarded numerous commendations while serving the citizens of Philadelphia, he served his countrymen and fellow citizens well by sharing his knowledge and experience with all his coworkers along the way.  Bob was well liked and respected by all who were fortunate enough to have know him.

Bob was married to his wife Diane for over 35 years and was the proud father of two sons Robert and Christopher and a daughter Dianne.

This scholarship fund is established in Lt. Robert P. Neary's  honor and memory.